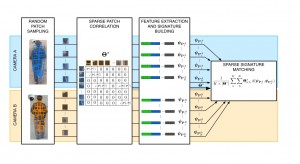 Given the frames of two persons acquired by two disjoint cameras four modules are
exploited to perform the re-identification:
(i) the random patch sampling module;
(ii) the sparse patch correlation module;
(iii) the feature extraction and signature building module; and the sparse signature matching module.

Most of the open challenges in person re-identification are introduced by the large variations of human
appearance and from the different camera views deployed to monitor the environment.
To tackle these challenges almost all state-of-the-art methods assume that all the image pixels are equally relevant to the task, hence they are used in the feature extraction procedure. However, it is not guaranteed the a pixel sensed by one camera is viewed by a different one, so computing the person signature using such pixel might bring uninformative data in the feature matching phase.
We believe that only some portions of the image are relevant to the re-identification task.
Inspired by this, we introduce a novel algorithm that:

This site uses Akismet to reduce spam. Learn how your comment data is processed.